Below are meetings and events for week ending July 5, 2014.

Join the Jacksonville Historical Society for a program and exhibit celebrating…

Offered by Patsy Underwood. Thanks Patsy!

This is a dated article, but thought it was an interesting read

THE IMPEACHABLE OFFENSES OF BARACK OBAMA

Whether or not the constitutional process of impeachment is appropriate in the case of Barack
Obama is currently being debated. This is not because of argument over whether there are sufficient
grounds, however. As anyone can see from the list below, no one else in history has generated
more justification for…

Does Florida Government know who's coming?

Floridians, I just called the Governors office & asked if they had notice of which cities in Florida would be receiving illegals from Texas/Arizona. They had no idea if any such list existed & advised me to call Homeland Security. I find it hard to swallow that our State Government is not going to get any kind of heads up if illegals are coming here. She could not even tell me which Florida State Department might have any knowledge on this information. This…

Will you & your family get a say?
This community spoke out loud & clear!…
Continue

Below are meetings and events for week ending June 28, 2014.

Below is a letter I have sent out to my US Congressman. WE THE PEOPLE need to stand up Now. Time is of the essence. The ramifications of the events taking place on our borders will be felt by American citizens in ways many of you have not thought would or could happen. Please take action NOW! Call your reps & tell your friends.

AMERICANS HAVE BIG HEARTS. IT IS IN…

Before anyone assumes that the City Council has been presented with a reasonable compromise on public safety pensions and tries to look for funding sources, we need to examine the fundamental economic flaws of the proposal which, unless they are addressed now, mean that the plan has to rely on uncertain financial assumptions regarding future inflation rates and market performance to avoid municipal insolvency.

In particular, unless the 3%…

Newspapers in El Salvador and Honduras are promoting Obama’s policy to defer deportation to minors brought to the United States as children by their parents — known as “Dreamers” and, telling their readers that this applies to all minors entering the United States.

According to our Secretary of Homeland Security, Jeh Johnson, “Almost all agree that a child who crossed the border illegally with their parents, or in search of a father or a better life, was not making an adult choice to…

An amazing week for Obama...

It was an amazing week for Barack Obama — perhaps the most remarkable in his disastrous presidency. We watched history unfold as it did in Greek mythology — with all of the ills that would confront mankind escaping from Pandora’s box.

Sunday, June 8: The week began with a “prayer summit” and tree-planting at the Vatican Gardens in Rome — hosted by Pope Francis and attended by Israeli President Shimon Peres and Palestinian President Mahmoud Abbas. There were…

Corey James wrote "Quit trashing Obama's accomplishments. He has done more than any other President before him. He has an impressive list of accomplishments:First President to apply for college aid a…

Corey James wrote "Quit trashing Obama's accomplishments. He has done more than any other President before him. He has an impressive list of accomplishments:

First President to apply for college aid as a foreign student, then deny he was a foreigner.

First President to have a social security number belonging to another man, from a state he has never lived in.…
Continue 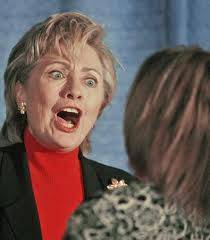 What a peach. She really epitomizes class and decorum, no? Just the sort of woman I would want to elect to office. (In case you can’t tell, I am using my sarcasm font) Here’s yet another example of why we love us some Hillary:…

Below are meetings and events for week ending June 21, 2014.

Last night I listened to Cantor's concession speech. For over 4 minutes he thanked EVERYBODY, but failed to congratulate Dave Brat. Brat's name was not mentioned even once. I bet if Cantor had lost to a Democrat, he would have congratulated his opponent. That is who the Republican establishment is. It is shame we have to fight the Republican establishment BEFORE fighting the Communist Democrats.

Below are meetings and events for week ending June 14, 2014. Lots to do this coming week! Please use the links if provided to get time and additional details.

Thank you to Kim Kendall for calling this to our attention!

Tonight there was a County community meeting to discuss proposed changes to Land Development Code amendments and Comprehensive Plan changes.  These will be voted upon next month before the Board of County Commissioners.

Suzanne Konchan said these proposed changes came from the Commission – not staff.  Only Commissioner…