Please get the word out to everyone that Mitt Romney's venue has been changed for tonight's rally (October 31st) to:  Metropolitan Park, 1410 Gator Blvd., Jacksonville, FL.

Hope everyone can be there.....God Bless America!

The Rescue of Roger Locher

Watch the Rescue of Roger Locher before you go and listen to the pride in the Brig. Gen. voice!
Obama is a… Continue

There is so much is going on as we close in on the most important election of our lives that it is hard to keep up. Following are four key events this week and if you can attend please please do. This is the time to be seen and to have our voices heard.

will take you to a one-minute video.  Please watch and forward the link to all your internet contacts.

Then, vote like the future of the country depends on it.

The OSCE (Organization for Security and Cooperation in Europe), a U.N. organization, is sending 44 observers to the United States to monitor the general election.

Don't look for a U.N. observer at your local polling place.  Eric Des Pallieres of France and Dragan Zelic of Croatia will be in Tallahassee.

OSCE responded to complaints by the Leadership Conference on Civil and Human Rights, the NAACP and the ACLU, among other groups, who warned this month in a letter to Daan…

Benghazi shut out by the lamestream media

I DVRed all the Sunday morning political debate shows that matter this morning to see what was going to at long last be said about Benghazi, fully believing that this could be THE pivotal moment of this election. I struggled…

STOP BY THE OFFICE AND PICK UP YOUR “FIRE OBAMA”, “MACK FOR SENATE” AND “ROMNEY/RYAN YARD SIGNS.

(SORRY, NO OBAMA/BIDEN OR…

Look at the life of Barack Obama.

Look at what's coming out of the woodwork.

t? Here is everything you always knew about Obama, his wife, Jarrett, Axlerod, all of the Chicago gang of criminals put together in riveting form. The network of evil is unbelievable!!

Can It All Be Coincidence?

As I noted in the introduction to…
Continue

I consider this the most important election of my voting lifetime. Presidents come and go (starting with Eisenhower in my memory), but the current POTUS is the worst I have seen in my lifetime. To paraphrase Michelle O, "For the first time in my adult life, I am truly afraid for…

Attached is the link from FOX News related to the breaking news on the attack in Libya that left four Americans dead.
I sat in shock and then moved to anger, paced around the house and decided that it is time for all Americans to stand and begin the shout of “We are NOT going to take it anymore !”…

IMPEACH THE PRESIDENT AND HILIARY AND THE REST OF THEM! 4 dead in Libya. President Obama said himself at 2nd debate that the buck stops with HIM the Commander in chief! All of our military and the people of the USA are sitting ducks! Impeach the President before Nov. 6th election. We, the people, cannot survive under Obama or Biden if we don't urge our representatives now! GOD BLESS THE USA!

Weekly Standard: Father of Slain SEAL: Who Made the Decision Not to Save My Son?

As more information comes out about Benghazi, this question was bound to be brought up by those who lost their loved ones in this horrible event that the leaders of our country just sat and watched while making no attempt to save our people.  Imagine the gaul to mention the video to this man who lost his son and never tell him the truth about what they did.… 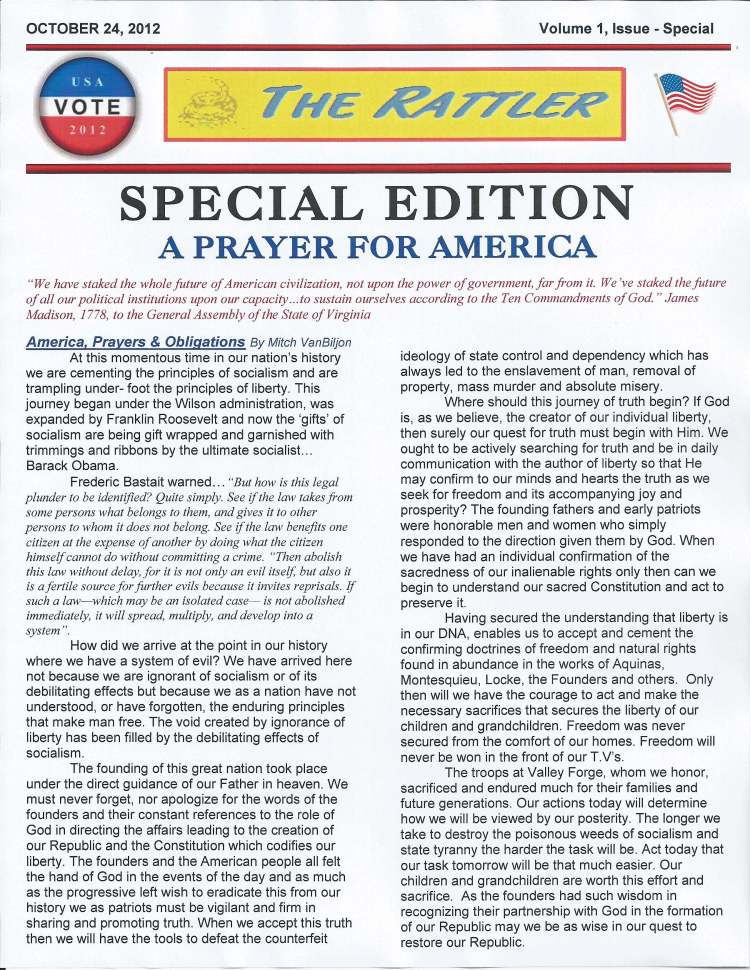 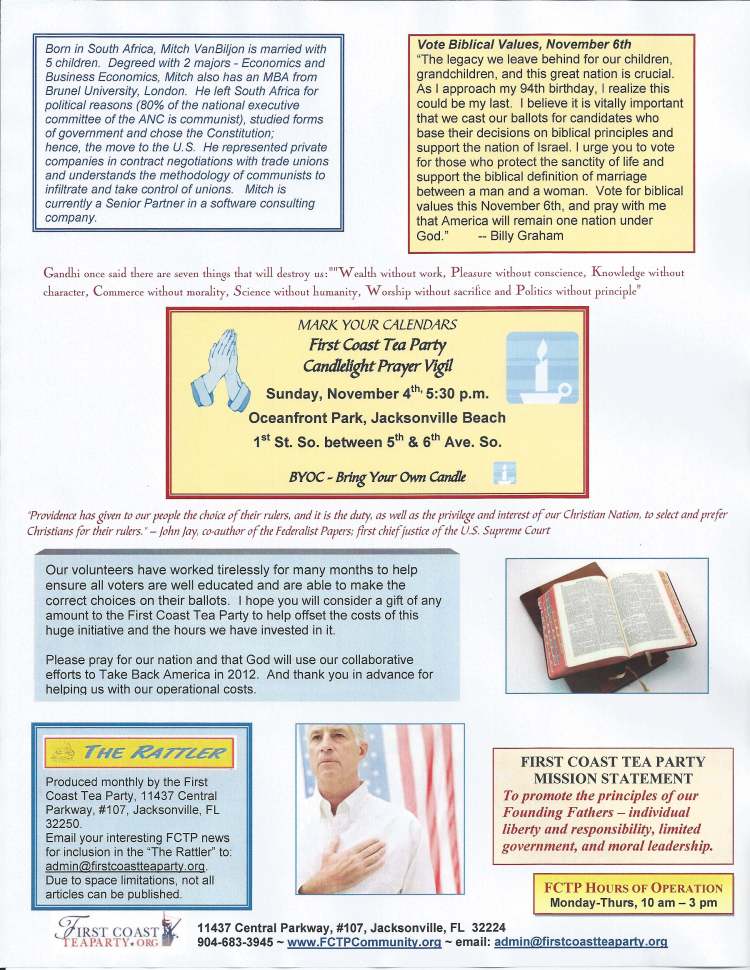 I STRONGLY DISAGREE, per your voting suggestions, in supporting #8 "Religious Freedom" on the ballet. We like to think in terms of supporting Christian based faiths, but this amendment is POORLY WORDED - OPENS THE DOOR to tax payer funds being ALSO used to support MUSLIM MOSQUES & ANYTHING deemed a "religion" or "sect" Here's what it says... ".. providing that no individual or entity may be denied, on the basis of religious identity or belief, governmental benefits, except as required by…

Come help save the WESTSIDE! I am Captain for a conservative literature drop and I need volunteers to help with an important task. This conservative literature will educate voters and shape a victory! Please help as this is a last minute project with a big payoff. Contact me at kerry@spd4u.com and put "Volunteer" in the subject line. Come out and help save the country!