The citizens of Jacksonville are fighting their own city council to stop them from trying to adopt a dangerous sexual orientation and gender identity ordinance.  Despite claims of “new compromise language,” the Jacksonville Human Rights Ordinance (HRO) 2017-15, puts women’s privacy, safety and dignity at risk when they use showers, locker rooms, spas, and bathrooms by allowing men to also use the same intimate facility.  Furthermore, it seeks to punish businesses and Christian ministries who simply wish to live, work and serve their community in accordance with the dictates of their faith without interference by the government.  Despite deceptive word changes, it’s still the same dangerous anti-liberty ordinance which has been defeated twice before.  A one-page analysis of what the deceptive proposal does can be foun...

What happens in Jacksonville does not stay in Jacksonville.  Like a transmittable virus, the momentum of this bad bill passing could mean that your town is next.  Please contact the Jacksonville City Council members via email and phone today and EVERY DAY THRU 2/14 AND tell them to “Vote NO on HRO.”

SHOW UP TO AS MANY OF THE MEETINGS BELOW THAT YOU CAN!!!

Stress the need to have the HRO as a "referendum" and let all citizens have a voice in the decision. The FAST TRACKING of the HRO will not be accepted by the people of Duval County.

THEY DO NOT WANT YOU THERE !!! 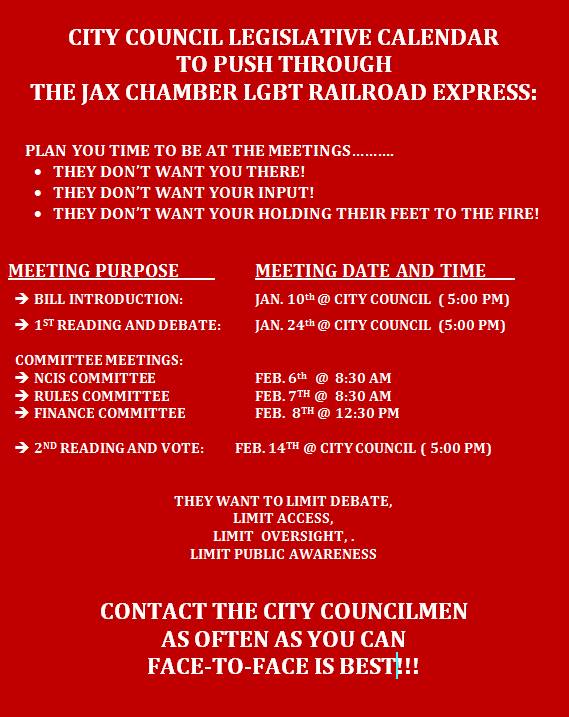 ONE MORE WAY YOU CAN HELP!

We need your financial support now to defeat this measure.  These are designated funds that will go directly to the campaign to kill this bad bill.  We have an immediate goal of raising $10,000 to take immediate action and defeat this bad bill (as we have down twice before).  Please give online now by clicking here. You can also call our office at (407) 418-0250 to donate to this critical effort.

One page analysis of the new 2017 ordinance

Understanding and responding to the transgendered movement

Video of the one-sided City Council public hearing introducing the ...

THE FOLLOWING MENTIONS THE THREE REASONS THAT THE CIVIC COUNCIL BELIEVES JACKSONVILLE NEEDS THE HRO.  THEY PRESENT GENERAL STATEMENTS WITHOUT SUPPORTING OR BASIC FACTS.

HOW MANY BUSINESSES HAVE REFUSED TO LOCATE TO JACKSONVILLE DUE TO THE LACK OF A HRO?

HOW MANY LEGAL CASES (AND WHAT WERE THE FINDINGS IN THOSE CASES) OF DISCRIMINATION WERE FILED IN THE LAST 3 YEARS?

DOCUMENTATION OF THE SPECIFIC INSTANCES OF DISCRIMINATION WITHIN THE CITY?

IS THIS EFFORT REPRESENTATIVE OF THE MAJORITY OF THE CITIZENS OF JACKSONVILLE OR THE LOUD VOICE OF THE MINORITY?

Good business leaders and governments DO NOT make emotional decisions, they make decisions based on FACTS.

WHERE ARE THE SUPPORTING FACTS? 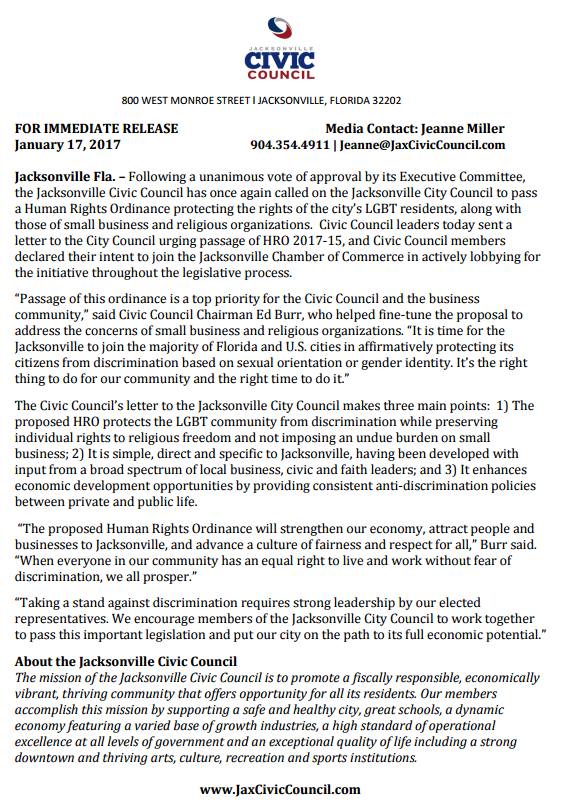 "And each of us can practice rights ourselves, treating each other without discrimination, respecting each others dignity and rights."

Councilmen Bowman, Hazouri and Love are the ones that have introduced HRO 2017-15!

Thank you for a great "ACTION" blast.  Time for one and all to let the City Council that "we the people" need to