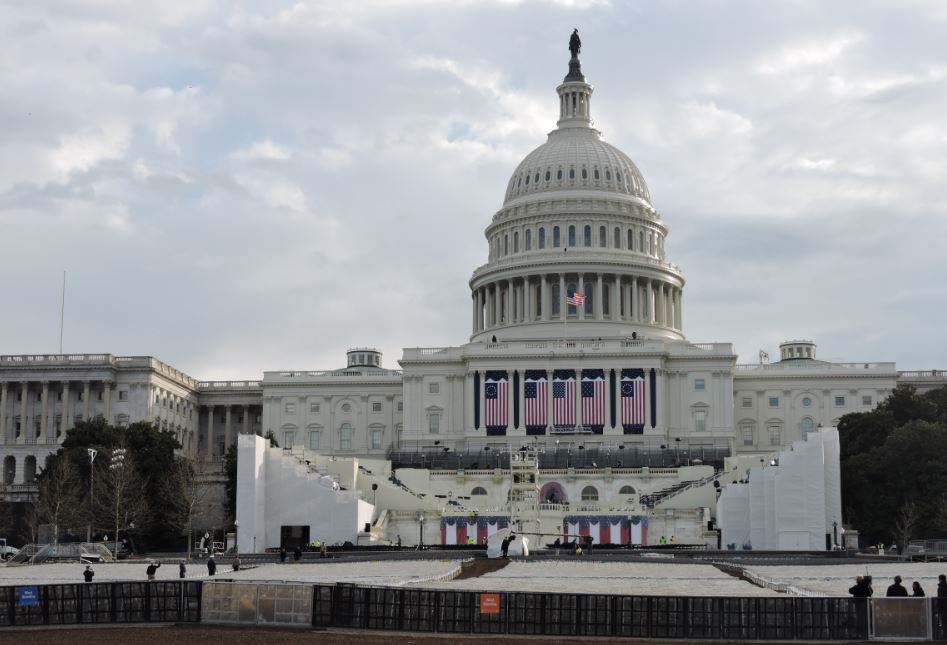 The hours are counting down in the nation’s capital to the Inauguration of Donald Trump as the 45th President of the United States, as on this Thursday, the Lincoln Memorial will be the focus of much of the pre-Inaugural celebrations, as police begin to cordon off vast areas of the city.

Around the U.S. Capitol, more and more security fencing seemed to pop up almost by the hour, as police not only cordoned off certain areas, but set up screening tents and more for the thousands expected at the Inauguration. 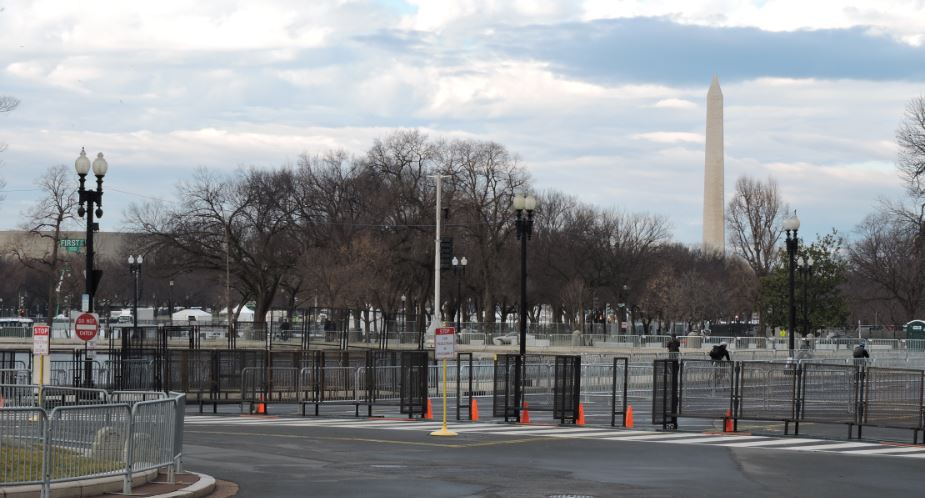 Not only is there fencing on Capitol Hill, but also stretching far down the National Mall, where areas have been cordoned off for people to gather for Friday’s swearing-in, allowing them to watch large screen TV’s, with the Capitol in the background.

You can see the white plastic that is covering the grass on the Mall; that extends far back towards the Washington Monument as well, as is shown in this next picture from inside the Capitol. (The arrow shows you where I took the first photo with the Capitol behind the fencing.) 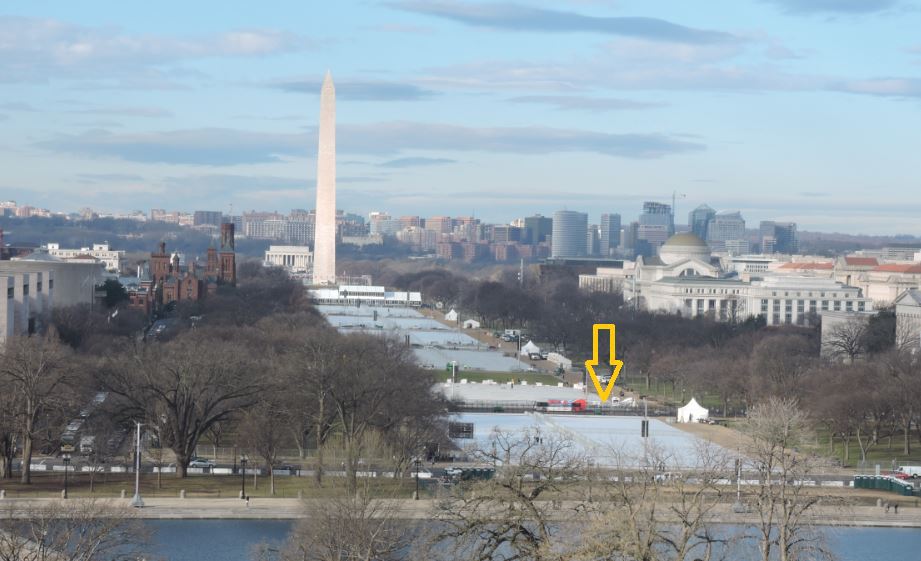 The West Front of the Capitol seems just about ready for its usual role; President Reagan was the first to hold an Inauguration on this side of the Capitol in 1981 – before that, it was always on the East Side.

My favorite part of the Inauguration prep is the placing of the five giant flags on the Capitol – I guess to me it signals that this is not just any event out on the West Front. 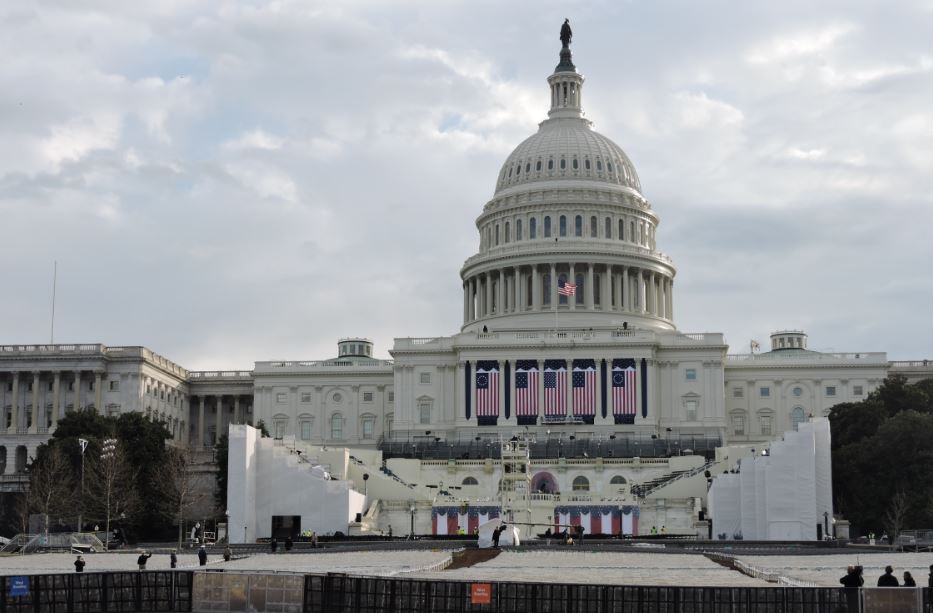 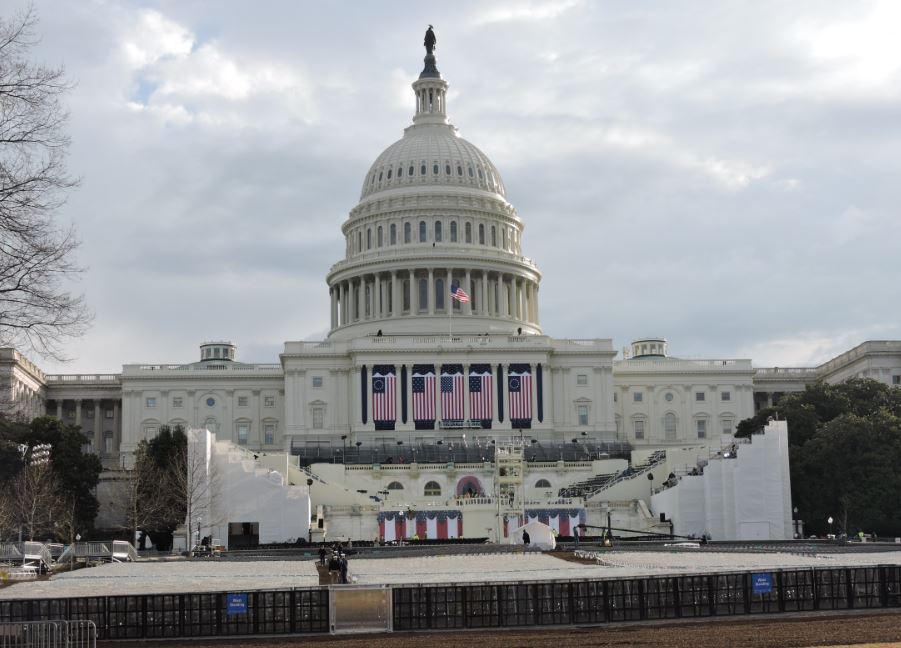 You can see the massive number of folding chairs that have been set out – at least the weather has been good of late, because you can imagine the work to sweep any snow off of that many chairs at this time of year.

Most people attending the Inauguration won’t have a seat, but will instead be in certain standing areas, like these: 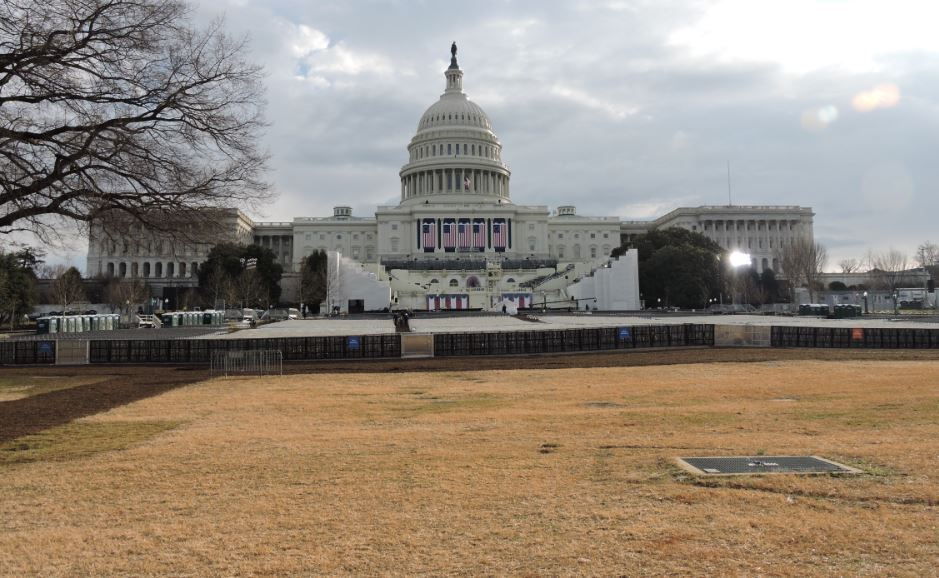 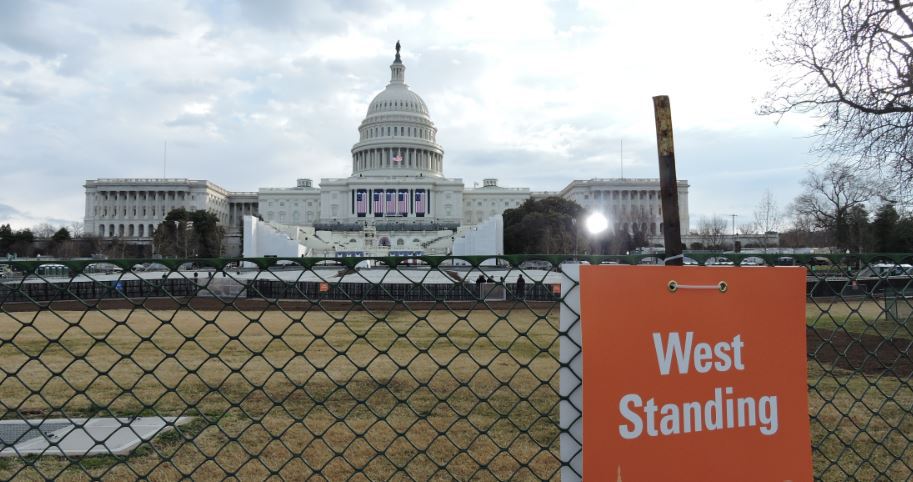 As for where I will be, I will take in the festivities from the climate controlled insides of the Capitol – you can see my window from the arrow in this photo: 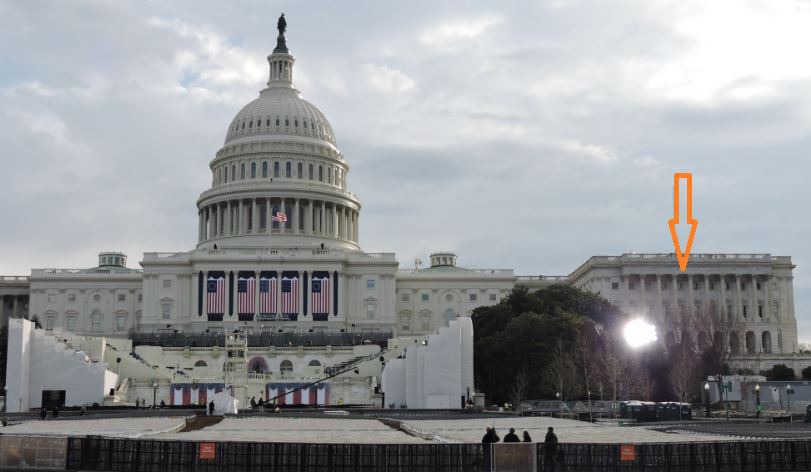 It provides a good overview of the VIP seats and the spot where the President will speak.

This will be the tenth Inauguration that I have been to; eight of them as a reporter.

I have covered every Inauguration since 1989, when George H.W. Bush was sworn in as President.

I was at Reagan’s Inauguration in 1981 – it was a day off from school for students in my suburban Washington, D.C. school system, so many of us made the trek down to the see the ceremonies and follow the parade back up Pennsylvania Avenue to the White House.

My very first Inauguration was in 1969, the first one for Richard Nixon.

Yes, I was only five years old at the time.

My parents were both working for members of Congress at the time, and as it got closer to 12 noon, my father’s boss decided he didn’t want to deal with the crush of people over at the Capitol, so there were two prime tickets available.

“It was on the East Front of the Capitol back then, a little bleacher for the people with the special tickets,” said Jim Murphy, a friend of my parents who had met my father soon after he arrived in Washington back in 1959.

Murphy had come up to Capitol Hill for all of the Inaugural parties that morning in various Congressional offices and stopped by the office where my father worked.

And there were some extra tickets going unused.

“So I took Jamie, it was really nice,” Murphy said.

It turned out the tickets were pretty good.

“You and Murphy were in the same box section with Ethel Kennedy and other dignitaries,” my father told me years later.

“I knew it was our best seat, but didn’t know it was that good.”

“And since the preservation of the sacred fire of liberty, and the destiny of the Republican model

of Government, are justly considered as deeply, perhaps as finally staked, on the experiment

entrusted to the hands of the American people”