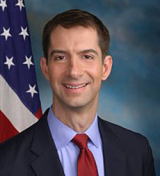 The BREAK THE CHAINS campaign has begun!

This morning, Sen. Tom Cotton (R-Ark.) announced that he will introduce legislation next week that would end ALL categories of Chain Migration -- and the Visa Lottery, too.

Chain Migration is the main reason that American workers have had to compete for wages and jobs with tens of millions of new immigrants who have been given lifetime work permits the last several decades.

Sen. Cotton says his bill would reduce the number of lifetime work permits given to foreign citizens by around 40% the first year -- and by around 50% in the tenth year after passage.

Ending Chain Migration is the primary way the bill would achieve that goal.

For several decades, immigrants no longer have been limited to bringing in a spouse and minor children. Chain Migration categories allow each immigrant (once a citizen) to petition for adult brothers and sisters, for adult sons and daughters, and for parents. Each of them can in turn do the same along with bringing their own spouses who can start whole new chains in their own families, and so forth in a never-ending pattern.

Sen. Cotton would stop all of that immigration which adds millions of workers each decade without any regard to their skills or how they would affect Americans competing in the same occupations.

By limiting family immigration to a spouse and minor children -- including overseas adoptions and marriages by U.S. citizens -- Sen. Cotton says the bill would . . .

" . . . restore historical levels of immigration in order to give working Americans a fair shot at wealth creation."

At around one million a year since 1990, overall annual legal immigration has been some THREE times higher than the historical average before then.

Sen. Cotton's bill will be the first since 1996 to challenge the Senate to eliminate future Chain Migration.

It was in 1996 that we started NumbersUSA with our Number One legislative goal being to end Chain Migration, as recommended by the bi-partisan federal commission chaired by the Civil Rights icon Barbara Jordan.

Sen. Cotton has boldly indicated today that he will assume the leadership to advance that vision of an immigration policy that first serves the interests of our national community's workers, especially its most vulnerable.

This year represents a rare opportunity.  It is the first time in nearly a hundred years that there is a President in the White House who has declared his intention to reduce the overall numerical level of immigration.

THE PROBLEM BEING ADDRESSED

Its initials spell RAISE. It's the RAISE bill. Sen. Cotton wants to give hard-pressed American workers a raise by allowing labor markets to begin to tighten.

Sen. Cotton described the problem his bill is attempting to address:

Sen. Cotton describes the key elements of his bill like this:

Eliminate Outdated Diversity Visa Lottery: The Lottery is plagued with fraud, it advances no economic or humanitarian interest, and it does not even deliver the diversity of its namesake. The RAISE Act would eliminate the 50,000 visas arbitrarily allocated to this lottery.

Place Responsible Limit on Permanent Residency for Refugees: The RAISE Act would limit refugees offered permanent residency to 50,000 per year, in line with a 13-year average. (This is the same annual refugee cap in Pres. Trump's executive order. It is also the cap recommended in the 1980 Refugee Act, which is current law but which Presidents have routinely exceeded.)

Eliminated would be green card categories for foreign citizens who are:

Create Temporary Visa for Parents in Need of Caretaking: For U.S. citizens who wish to bring elderly parents in need of care-taking to the United States, the RAISE Act creates a renewable temporary visa on the condition that the parents are not permitted to work, cannot access public benefits, and must be guaranteed support and health insurance by their sponsoring children.

The difference in this being a wonderful bill and it being an incredibly helpful law is likely to be the degree to which the 8 million members of NumbersUSA's online grassroots army make it clear to their Members of Congress and to Pres. Trump that this is a TRUE PRIORITY.

But the REFORM should be to make it more difficult to become a citizen, and to accept ONLY THE BEST foreigners from all ove the world. Our current policy of accepting mostly the poor, uneducated, unskilled, unhealthy and elderly is ONLY hurting our own citizens in the same above categories. In addition we are intentionally bringing in immigrants of  very different cultures which are incompatible with our unique AMERICAN, ENGLISH SPEAKING, WESTERN EUROPEAN AND CHRISTIAN CULTURE.

The globalist politicians, Democrats and Republicans alike , are only trying to change our demographics by weakening and Balkanizing our once unified and omnipotent nation. They just want cheap votes and cheap labor. In addition, those bleeding hearts who only want to deport "CRIMINAL" illegal aliens because the others are "law abiding" fail to recognize that all illegals are LAW BREAKERS and we should not reward breaking our laws.

It is time to PUT AMERICA AND AMERICANS FIRST, just as you put your own family FIRST.  This is just common sense and to do otherwise is just STUPID and UNAMERICAN. Trump is on the right track.