Do not let this Super Bowl week-end keep you from taking action here. They act on these on Tuesday.

Below are three alerts for you to take action on. These action alerts involve Red Light Cameras, State Lands and Direct Care. We want to make sure that these bills continue to move along in the State Senate Please help us get these bills moving and make these calls and emails TODAY. 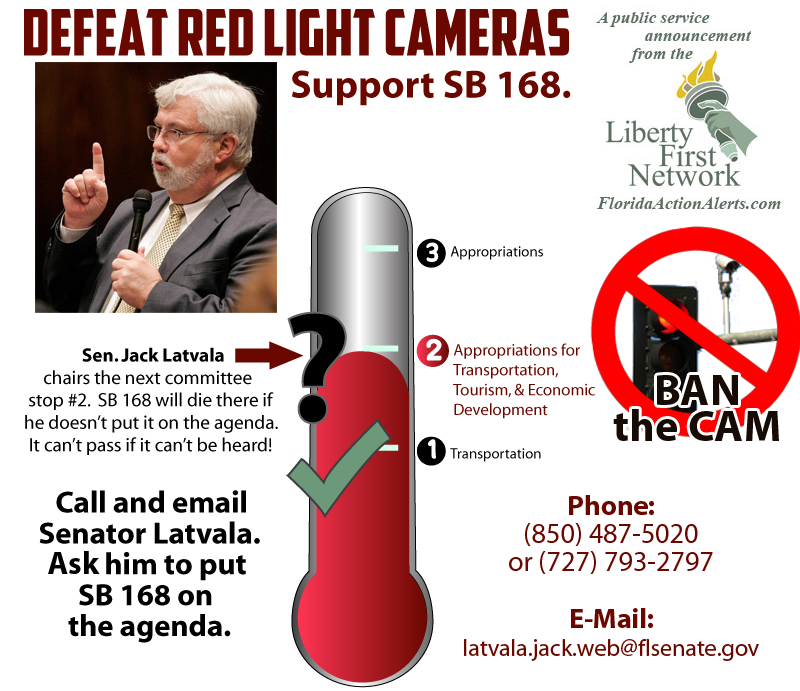 STATE LANDS
SB 1290 deals with state owned property, specifically “conservation land”. The state along with the Federal government already own almost 1/3 of Florida’s land mass for conservation purposes. The state doesn't need all of what it owns now to provide recreation and ensure conservation of wildlife habitat, SB 1290 also recognizes the state cannot afford to buy and manage all of the land that may be needed to conserve habitat.

SB 1290 directs state agencies to establish alternatives to the full purchase of land for conservation as well as procedures for getting rid of land it owns now. SB 1290 includes a review process by the state Acquisition and Restoration Council and the Florida Cabinet to determine whether there are lands the state no longer needs for conservation.
SB 1290 will be heard in the Senate Environmental Preservation and Conservation Committee on Tuesday February 9th, 2016 at 1:30 PM

TAKE ACTION
Call and e-mail the members of the Senate Environmental Preservation and Conservation and tell them to support SB 1290 to stop the state's buying spree of land!

Copy and paste to Email

DIRECT CARE
SB 132 provides that a direct primary agreement and the act of entering into such an agreement are not insurance and not subject to regulation under the Florida Insurance Code and exempts a primary care provider, which includes a primary care group practice, or his or her agent, from any certification or license requirements in the Code for marketing, selling, or offering to sell an agreement.

These direct patient/doctor agreements allow a system uncontrolled by government regulations to develop. It makes doctors responsive to patients, not insurance company bureaucrats or government rule-makers. Because government bureaucrats do not like anything they can’t regulate and control, and big insurance companies do not like competition, there are attempts to define Direct Primary Care agreements as a form of insurance that would be under a mountain of regulations and bureaucratic red tape.
SB 132 would protect direct patient/doctor agreements from burdensome government regulations and represents a first step toward real healthcare freedom in Florida.
SB 132 will be heard in the Senate Banking and Insurance Committee on Tuesday February 9th, 2016 at 10:30 AM

TAKE ACTION
Call and e-mail the members of the Senate Banking and Insurance Committee and tell them to support SB 132 to keep government out our healthcare decisions.

Copy and paste to Email

Thank you for your loyal and continued support

"Action is the foundational key to all success."
Pablo Picasso

2-9-16  I sent an e-mail to latvala.jack.web@flsenate.gov as indicated above (red light camera repeal) and it bounced back saying "Undeliverable".