From My Point of View 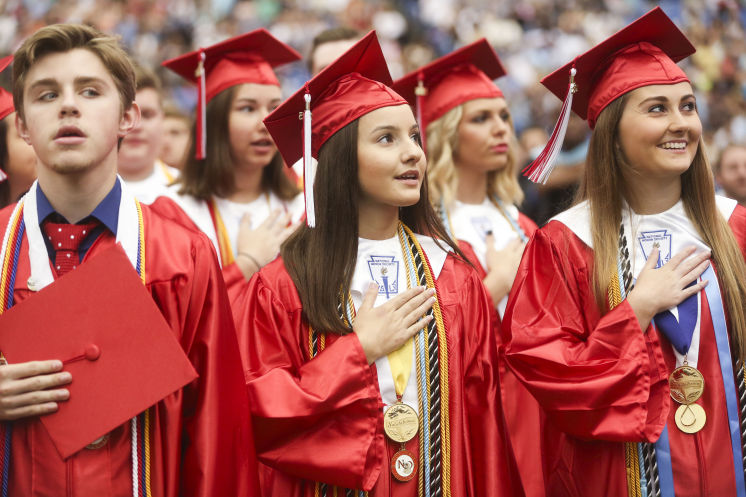 You will need to read this item carefully and fully understand the proposed changes to the current statute/bill before deciding what your message about this will be.

In reading the headline I thought  this was ONLY about changing the notice of the disclaimer - but then the details...

First: is the clarification of the word "CONSPICUOUS" related to the posting of the disclaimer which alerts students of their right not to participate in the Pledge of Allegiance.

Second and third: issues deal with wording that clarifies that students excused from reciting the pledge do not have to stand and place their hand over their heart. However, NOTE that the new wording includes language which also EXCLUDES CIVILIANS from the current requirement that they stand during the pledge. ( Does this mean teachers and other civilians who might be in attendance no longer have to stand?)

TALLAHASSEE — A reported overabundance of disclaimer notices in a Florida Panhandle county's public schools that alert students of their right to not participate in the Pledge of Allegiance has prompted bipartisan legislation that earned its first approval in a state House committee on Monday.

Florida law requires the pledge to be recited at the start of every school day in every public school statewide, but students have the right to be excused under a 1943 U.S. Supreme Court ruling, as long as they have written permission from a parent.

Schools have to "post a notice in a conspicuous place" to let students know of their right to opt out. The legislation put forth by Broxson — and co-sponsored by Reps. Mike Hill, R-Pensacola Beach, and Ed Narain, D-Tampa — would change state law to, instead, require schools to publish the notice in student handbooks.

The bill also clarifies that students excused from reciting the pledge don't have to stand and place their hand over their heart.

Broxson told House members that where a notice is posted in schools became "a major issue" in Santa Rosa County near Pensacola and Fort Walton Beach, areas with high populations of military families and an extra sensitivity to respecting the American flag.

He said the Santa Rosa County School District was prompted to require the mandatory notice "in every classroom where the flag appeared," after a parent complained at a School Board meeting with a lawyer present.

"Some people believe we overreacted in Santa Rosa," he added. But under the legislative proposal, "if there's any concern about whether they could say the pledge, it would be dealt with in the handbook."

The House bill has two more committee stops, next before the education budget committee.

The Senate companion — SB 1600 by Sen. Greg Evers, R-Baker — has yet to receive an initial hearing before the Senate Pre-K-12 Education Committee.

Link to Statute referenced in the Bill:

This is the first part of the Statute which relates to the proposed changes.

THIS IS THE SUMMARY OF THE  PROPOSED BILL

Currently, each school district board may adopt rules that require, in all
district schools, programs of a patriotic
nature. The programs are designed to encourage greater respect for the United States government, the national anthem and the flag. The
programs are subject to other existing laws of the United States or the state.
In each public elementary, middle and high school in the state, the pledge of allegiance (the pledge) shall be recited at the beginning of the day. The pledge
shall be rendered by students standing with the student’s right hand over
their heart. When the pledge is given, civilians must show full respect to the flag by standing at attention. Men must remove their headdress,unless worn for a religious purpose. Each student must be informed of the right not to participate in the pledge by a notice posted in a conspicuous place.
The student is excused  from the pledge when the student obtains a written request from their parent.
The bill repeals the requirement to conspicuously post notice of the right not to participate and instead provides
that students shall be informed of the right not to participate in the pledge by a written notice published in the
student handbook, the code of student conduct or a similar school publication.
The bill removes the requirement that all civilians, including excused students, stand and place their hand over their heart during the pledge.
Instead, only unexcused students must stand and recite the pledge.
The bill does not have a fiscal impact on state or local governments.

Note: The actual bill is not currently up on the Florida Government website and therefore we cannot see exact wording..The Summary is all we have to work with.

Next Stop will be the Education Committee

Call each of the members of the Education Appropriations Subcommittee below and share your stance on the proposed changes to the existing law as related to the items described above.

I would hit three major points

1. Agree to the moving the disclaimer to the student handbook or code of conduct document.

2. Question why "Excluded" students should not stand with their hand over their heart while the Pledge of Allegiance is being recited by others?

3. Question why CIVILIANS in attendance are being excluded from the current requirement to stand and recite the Pledge.

For future reference this information is available on the main page of the website at:
www.fctpcommunity.org

YOU DO NOT HAVE TO HAVE A FACEBOOK PAGE TO VIEW YOUR FCTP PAGE.

CLICK THE LINK BELOW OR CLICK ON THE "F" LINK UNDER HELPFUL LINKS ON THE RIGHT SIDE OF THE HOME PAGE.

Visit us on your Facebook page for daily news and general information:
https://www.facebook.com/pages/First-Coast-Tea-Party-Inc/1174774949.

I had to read this several times to gain clarity

Please take the time necessary to form your own opinions and then contact committee members to have your voices heard.

"The American flag is the symbol of our freedom,
national pride and history."
Mike Fitzpatrick

Thank you for your input Eric..........This is one that will certainly have people talking.

Comment by Eric VanDenhende on February 8, 2016 at 12:00pm
If I might, I'd like to suggest that the proper action by one not wishing to recite the pledge is to stand respectfully, but without hand over heart. The latter is, essentially rendering a salute.

Standing, respectfully, is important as it indicates that one has respect for the beliefs of those reciting the pledge, just as they have respected the beliefs of those who do not chose to recite it. I would do the same if I were in a foreign country and they presented their flag or national anthem. You show respect, but not fealty.