1 Day to Nov 2: The Changing Leaves of the Liberty Tree

We recently installed a large flag pole in our front yard. We knew that we wanted the American flag waving in the breeze and I also wanted another one below it. We considered our state flag and even the Gadsden flag. Neither one appealed to us for this purpose so we went on a mission to uncover the meaning behind the flags.

As soon as I saw a picture of the “Appeal to Heaven” flag aka the Liberty Tree flag, I knew that was the one! 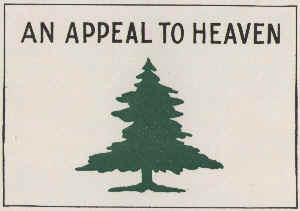 The Sons of Liberty, a secret American inter-colonial organization founded in 1765 to oppose the Stamp Act would rally under a large tree in Boston. This came to be known as “The Liberty Tree.” The tree became a symbol of American independence. Almost every town in America had its own Liberty Tree – a living symbol for individual liberty and resistance to tyranny.

George Washington decided to use this symbol and commissioned the flag. He flew them over his squadron of six schooners in 1775. Washington knew they were up against a great military power. He also believed that a greater power in heaven would sustain them…thus, the name: “Appeal to Heaven.”

Liberty is precious and no one knows what tomorrow will bring. We go about our daily lives and all around little things are happening. Those little things will erode liberty if we are not watchful of the changing scenery.

Your job and mine is to stand under our own Liberty tree and appeal to heaven to help America once again.

Let’s take this last Sunday before we change Congress and thank our God in heaven for His blessings. Seek wisdom as you notice the little changes and join the new generation of Sons of Liberty called the Tea Party Movement.

A videographer took still pictures of a tree in his backyard as the leaves changed. The photo was taken from the same spot in the month of October. Watch this video and realize – the tree was full one day and then it wasn’t. It happened slowly then quickly – the tree was changed.

Be aware. Be steadfast. Be ready. Look for those slight changes in the winds of America and send your appeals to heaven daily to protect our Liberties forever more.

Comment by sabrina Wheeler on October 31, 2010 at 6:29am
I always enjoy reading Billie's e-mails but this one really struck home. I wish everybody knew how important the Tea Party is to our country just by spreading knowledge which in turn is power. The way the left is portraying us as racists is so out of character of who we are and what we stand for. An Appeal to Heaven flag is an excellent symbol to represent and protect our liberties. Thank you Billie for all that you do!