From My Point of View

"Councilmen Tommy Hazouri and Bill Gulliford said on Saturday they will ask Council President Greg Anderson to withdraw each member's bill to expand Jacksonville's current Human Rights Ordinance to include the LGBT community."

WHAT ARE YOUR THOUGHTS?

The following link contains a video and was seen on Saturday the 13th.

Verbiage from the article below:

HRO Bill 2016-2, sponsored by Hazouri, would put a protection for the LGBT community in the HRO if approved by the City Council.

HRO Bill 2016-1, sponsored by Gulliford, proposes putting the issue on the August ballot for a citywide vote. That bill is favored by opponents of the amendment.

Hazouri released a statement saying "many citizens of Jacksonville still have sincere questions and are not ready to move forward on this issue." Hazouri added "this bill and this issue is coming back" when the time is right for the city and for citizens. He told News4JAX that he didn't believe his bill would pass in it's current state. He said he wanted to fix it before moving forward.

"I plan to take the next several months to continue working with the office of the General Counsel, further addressing the bill’s effect on small businesses, religious organizations and public accommodations.  It is also critical that we make certain that the public understands that this is not a 'bathroom bill,' Hazouri's statement said.

Councilman Gulliford told News4JAX on Saturday that he will also ask Council President Anderson to withdraw HRO Bill 2016-1. "He (Hazouri) has a legitimate argument when it comes to timing. It may run deeper than that but I think it's the appropriate move. I made a commitment publicly that if Hazouri would withdraw his bill, I would withdraw mine."

The Jacksonville coalition for Equality responded Saturday night, saying "This is a setback to be sure, but by no means a defeat. Councilman Hazouri has been a steadfast champion for equality and we know that he remains committed to passing a fully-inclusive amendment to our human rights ordinance."

Following is the Article from the FTU -  yesterday, the 14th 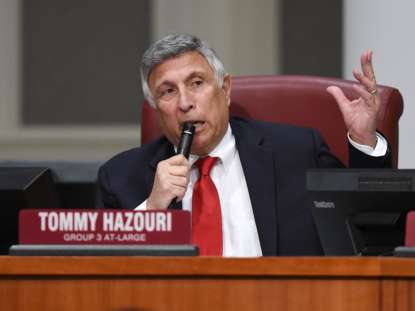 Jacksonville City Councilman Tommy Hazouri said Saturday he will suspend his push to adopt local discrimination protections for the LGBT community, injecting new uncertainty into a high-profile debate that has loomed large over city politics for much of the year.

After numerous meetings with colleagues and public forums it’s now clear “the City Council and many citizens of Jacksonville still have sincere questions and are not ready to move forward on this issue,” Hazouri said in a written statement. As a result, he plans to ask the council to withdraw his legislation that would expand the city's anti-discrimination law — called the human-rights ordinance — to include lesbian, gay, bisexual and transgender people.

“Be assured, this bill and this issue is coming back,” he said.

Hazouri’s decision means the divisive issue will effectively be tabled, leaving Jacksonville one of the largest major cities that lacks legal discrimination protection for the LGBT community.

“It’s pretty shocking, honestly, to see the bill is being withdrawn,” said Jimmy Midyette, legislative director for the Jacksonville Coalition for Equality, which supports expanding the law. “The coalition is going to keep working on getting it passed.”

There was an assumption the 2015 city elections may have established a political environment and the City Council that would be more receptive to the issue than in 2012, when similar measures narrowly lost council votes. That has not panned out so far.

Mayor Lenny Curry said during his campaign in the spring that he was unconvinced the law needed to be changed, but many activists — including some of his biggest financial supporters — had hoped he would change his mind once in office. He did not.

Even strong support from the business community — normally a potent force in Jacksonville — has not appeared to help move the effort significantly forward. Activists have also garnered support from prominent Republicans and the backing of numerous local religious leaders, including the lead pastor at Curry’s church, Southside United Methodist.

Hazouri, who has made the issue a top priority since his 2015 campaign, said he plans to reintroduce the bill at a later date. He said he’ll meet with city attorneys over the next several months to discuss the impacts of an expanded anti-discrimination law on small businesses, religious organizations and public accommodations.

“I believe that passing this legislation … is imperative if we are truly to be One City—One Jacksonville,” Hazouri said. “Today, we are stuck in the past, frozen in time, when it comes to human rights.”

The council is in the middle of deciding whether to approve Hazouri’s bill or competing legislation, introduced by Councilman Bill Gulliford, that would let voters decide whether to expand the city’s anti-discrimination law in a referendum. Putting the issue up for voters to decide is a move widely believed to favor the movement against expansion.

Gulliford said Saturday he would withdraw his own bill, saying he’s happy to set aside an issue he considers little more than a distraction.

“There are many more important things we need to be engaged in right now,” Gulliford said.

The issue — as with the council’s narrow rejection of similar legislation in 2012 — has stirred competing public passions and ramped up political pressure from the city’s LGBT, business and religious community.

Hazouri's announcement follows a failed attempt to withdraw the legislation at the council’s first special meeting on Feb. 4. That effort, proposed by Councilwoman Lori Boyer, was rejected in an 8-11 vote.

While Hazouri’s legislation survived the first meeting, the close vote revealed many council members wished to hold off on the issue and that it’s still unclear whether either piece of legislation had enough votes to pass.

Hazouri said he plans to make his withdrawal request Thursday, when the council holds its second of three special meetings scheduled to debate the issue.

“For a significant portion of the people of Jacksonville, this HRO issue is one of the big important issues going on,” Midyette said.

“It was big enough to be a question at every candidate forum, from every news outlet in 2015 during the municipal elections. People aren’t going to turn their attention off of this.”

Below is the link to the meeting on Thursday afternoon where it is expected that the HRO bills will be "requested" to be  withdrawn..

Visit us on your Facebook page for daily news and general information:
https://www.facebook.com/pages/First-Coast-Tea-Party-Inc/1174774949.

"When a nation goes down, or a society perishes,
one condition may always be found;
they forgot where they came from.
They lost sight of what had brought them along."
Carl Sandburg

I would love to attend the council meetings but it's too difficult for me to find affordable parking. Too bad someone doesn't have a van and go around picking people up!

I have sent 3 e-mails to haz and his c-conpirator---bowman---in the last 6 weeks asking for PROVEN cases of discrimination---bowman said ---he dont know nuffin--but at least he answered--=The haz NO ANSWER. he did have his assitant e-mail me about a study ucla did in 20 states in the country which I replied I want info on the basis of cases in duval county. what a coward. RUN FOREST RUN>

An insult, rebuke and disservice to the people of Jacksonville.  The decision to play politics because it has become clear that the majority of Jacksonville voters do not want this Hazouri bill and lifestyle forced upon them by law.

Both Hazouri and Gulliford are ignoring the voters and deciding for them what they will have.   Their cowardly actions will only ensure that this issue remains under control of politics and government.  A cop out to avoid and bypass the citizens.

Pure politics is what Hazouri brings to the table rather than representing the wishes of the citizens.

It will be interesting to see the attendance at the Thursday Meeting on the HRO despite the news that both Councilmen have requested their respective bills be withdrawn.