The danger to America is not Barack Hussein Obama or the Muslim Brotherhood it is a Congress and nation of capable citizenry trusting the decisions of a man like him without the appropriate checks and balances thus allowing the elected prince the opportunity to become a King.

It will be far easier to end his reign now rather than have to undo the follies of a second term Obama Presidency.

A prayer for election night by Lou Pritchett

A prayer for election night by Lou Pritchett. With his approval I am sending it out now. PLEASE SHARE AND GET IT AROUND AMERICA.

To those of you who may not have made up your minds (or paid close attention to recent history) about our upcoming election, you need to be reminded of who REALLY caused the financial crisis that BO likes to claim he "inherited" , and for God's sake, make an informed decision on Nov.6!

These men and women paid the ultimate price in defense of America and our way of life. This flag represents the UNITED STATES OF AMERICA one nation under GOD! Our… 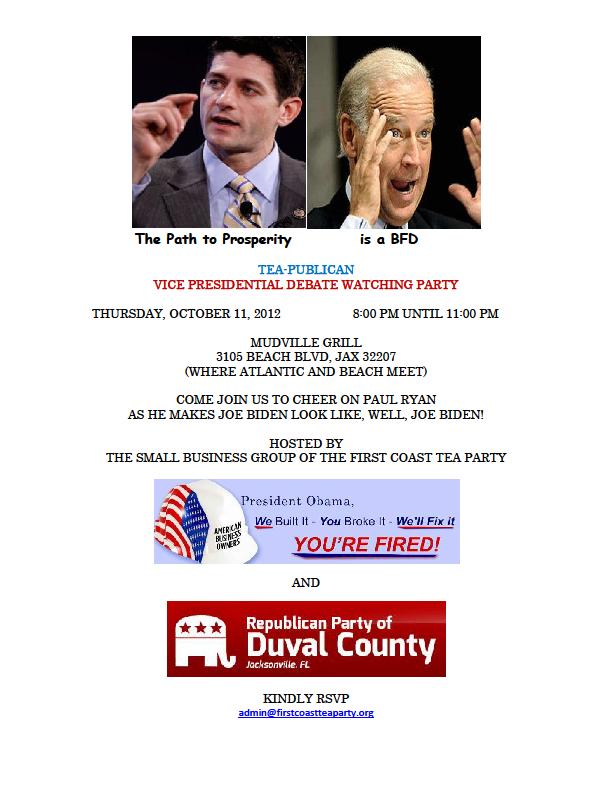 My Most Sincere Apology

I have stated for months that there was no voter fraud here in Florida and that the laws passed were done so to suppress the vote and not end voter fraud. But I was wrong there has been discovered a widespread voter fraud right here in Florida. Though the new laws did not specifically catch these criminals it does show that the problem exists.  I was wrong. Here is a link to the story:…

Weekly schedule and DANGER OF LOSING DUVAL COUNTY. EVERYONE MUST TAKE ACTION

WHAT IS ON YOUR CALENDAR?

NEWSFLASH.!!  DANGER DANGER!!  THREE COUNTIES IN FLORIDA ARE SHOWING SIGNS THAT THEY MAY BE LOST TO THE OTHER…

Our young people speak..Voices without a VOTE

Meeting with Candidates on Thursday, Sept. 27

Did any of you see The Blaze special last night? part one of The Project. They are here, they are moving their horrific agenda "forward".

U.S. Army Lieutenant General (Ret.) William Jerry Boykin claims that individuals with connections to the Muslim Brotherhood hold security clearances in both the Pentagon and the Department of Defense.

Under Obama SAT Reading and Writing Scores Worst in 40 Years

President Obama claims to be the president who cares about education, but more and more, he’s the president that cares about Teacher’s Union votes and campaign money. So which is Mr. President, the unions or the students? Pick one.

Obama To UN: ‘The Future Must Not Belong To Those Who Slander The Prophet Of Islam’

40 DAYS OF PRAYER BEGINS THIS FRIDAY.

For several weeks I have been speaking on "The Secret of America's Survival!" That secret is for God's people to unite in prayer for the survival of the United States of America.

I have asked our church body of 20,000 and our national television audience of millions to join us in this 40 day prayer meeting. We have been handing out…

The globalist march toward Agenda 21 includes the demonization of…

Steve Kroft (born August 22, 1945) is an American journalist and a longtime correspondent for 60 Minutes. His investigative reporting has garnered him much acclaim, including three Peabody Awards and nine Emmy awards, one of which was an Emmy for Lifetime Achievemen

You can understand what is happening to our America after reading this.  May God have…

“I am pleased the U.S. Senate declared its unanimous opposition to international…

WEEKLY SCHEDULE OF EVENTS and HOLD THE DATES

WHAT IS ON YOUR CALENDAR?

Libya a point of Conflagration

The ensuing conflict between the rule by fear and the peace that surpasses all understanding is building to a crescendo that will engulf the entire world.

Mitt Romney is a Moral leader!

If I were Mitt Romney------The American people have lost confidence in the intelligence, and the integrity of our own political and religious leaders. Leaders who profess to have "deep and personal" faith, and then go out of their way everyday to prove this faith has no place or bearing in the practical decisions they make. When that confidence is lost, regaining it is difficult.  No one seems capable of taking the lead and rallying the moral people of our nation.…

In just 21 days, Atlas Shrugged Part II will be barreling into a theater near you. Advance ticket sales start today in select cities.