IF POSSIBLE, PLEASE LOGON TO THIS WEBSITE AND ORDER A PAIR OF WREATHS.  BELOW IS THE FORM YOU WILL HAVE TO FILL OUT.  ALL OTHER PERTINENT INFORMATION SHOULD BE HERE.

When you buy the Military Tribute Patriot Pair you buy two wreaths: the flagged wreath will be sent to the home or business address of your choice and the second…

King Obama has just spoken again (like the broken record he has been for the last 4 years on increasing taxes).

If you care about the financial cliff, King Obama was just on TV telling folks to write and demand the middle class get the break and taxes be raised on everyone over $250,000 without any cuts being made in the budget (he will make the cuts later on ............. who is he kidding?............he will not make cuts and does not want to make cuts).   If you would,…

I have this discussion with some of my friends, and I just cannot understand the "other" side!  Here's my take:

"Fairness is in the eye of the beholder", for sure.  Let's see, the 2 near extremes of the spectrum of fairness in taxes would be, on the one hand, everyone pay the same amount for the same average share of government services.  Like going to the movies.  I pay $7 per ticket, you pay $7 per ticket.  On the other extreme, we each pay a percentage of our income.  If you make…

Rubio does not want an independent investigation of the Benghazi attack

I don't know about you, but this does not give me a warm, fuzzy feeling.  TWO MONTHS AND 17 DAYS AND NOTHING IS DONE YET.  They want it all to go away.  And what is there to investigate besides who gave the STAND DOWN order three times?   This administration FAILED in multiple ways.  Period.

Senator Marco Rubio was the headliner at a rally for Israel held at a South Florida Jewish Community School this past weekend, where he reiterated his support for America’s closest ally…

The 2012 election is over and now is the time to focus on delivering on the promises you made to the country during the campaign.

With the so-called “fiscal…

God created this great country of ours. We have a Constitution based on God’s law and a Supreme Court that meets in a building with Moses holding a copy of His commandments over the entrance. We are under God’s law and he has walked with us through the years as we followed His commands.

What does that mean for us as we move “FORWARD” toward a fiscal cliff brought about by our leaders who have out right rejected the sovereignty of God?

"Providence has favored our undertakings"

"In politics, as with evangelism, God simply calls us to be faithful to the message and the task. The results are in His providential hands.  When history is behind us, we rest in His sovereign plan.  We do our best to promote the virtuous and expose evil and deception.  We work hard to elect the most principled candidates.  We steward our citizenship by…

This year when you are making your Christmas Cards out please send an extra special message to a Wounded Soldier. Let's all do this and fill their lives with a little extra joy.. Let them know how much you and the First Coast Tea Party Patriots appreciate and care for them. 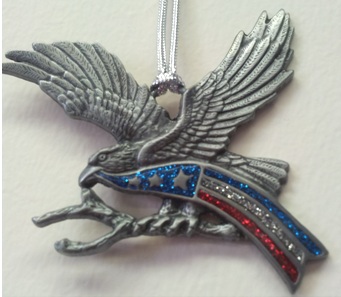 To order email LeAnne King at leaking55@comcast.net or call the office at 683-3945 to arrange pick up.  Also available at Atlantic Laser, 1521 Penman Rd.,…

Secession or Re-Declaration for Freedom? Sign the Declaration of Independence

Please forward this to ALL and post everywhere, WE are FREE people!!!!!!
From the Declaration of Independence
That to secure these rights, governments are instituted among men, deriving their just powers from the consent of the governed. That whenever any form of government becomes destructive of these ends, it is the right of the people to alter or abolish it, and to institute new…
Continue

Excuses, excuses, excuses.  Nothing like signing a pledge (your word), then deciding when it is good, or not.  And these people want me to vote for them again?  Strange thing about me:  I expect people to uphold their word.  It is, after all, their bond.

Agenda 21: A real agenda, not a conspiracy theory

When I read on Page 185 of the March 2011 Cobb County Comprehensive Plan that the county supports the advancement of sustainable development policies as defined by the United Nations Division of Sustainable Development, I could no longer ignore that the U.N. Agenda…

END OF AN EMPIRE

"If I were in Congress in 1941, I would have signed a declaration of war against Japan," said King on…

Joe Goldner  ran in the Debbie Wasserman Schultz - Karen Harrington race.  In the long run, I believe he had to drop out.  He SEEMS TO BE a decent kind of guy.  For those who are interested in Agenda 21 info, you may want to tune in.
…
Continue 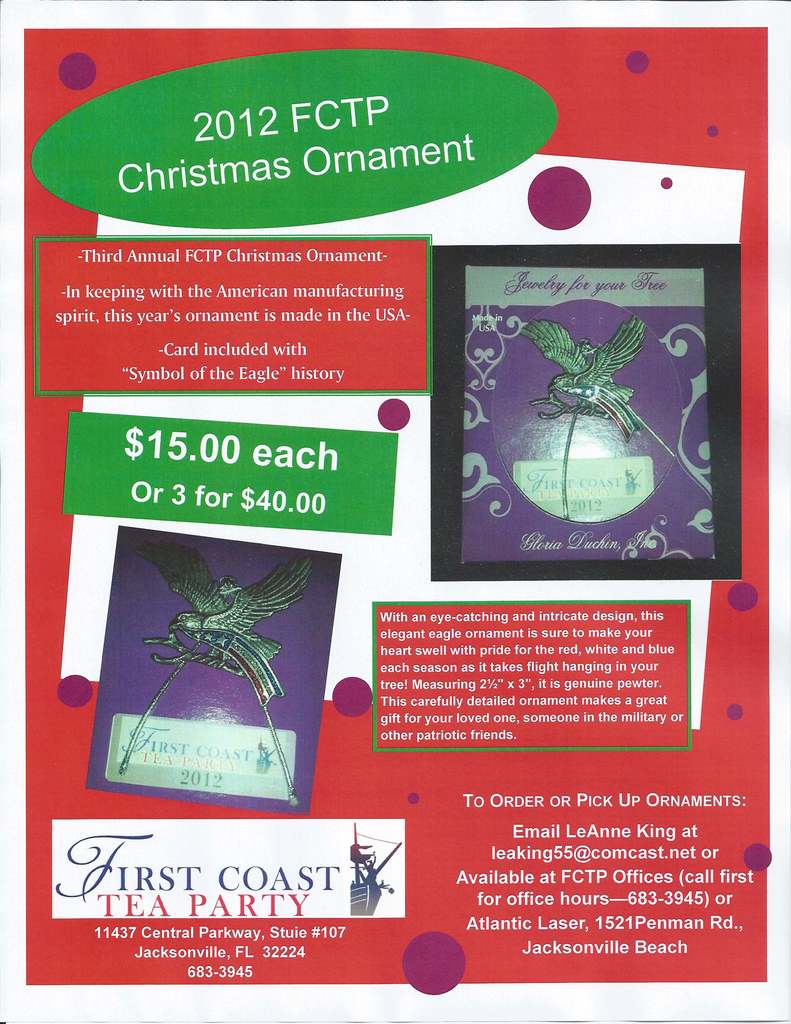 This is the third year that the FCTP has offered a special Christmas ornament to sell which will help with the costs of our operating expenses. This year a beautiful American Eagle.  Please help your tea party by purchasing these beautiful ornaments for family and…

Herein lies the problem with giving away part of our sovereignty.  I wouldn't get into a deal with these folks for love nor money; they are nothing but a front for every over the top, nasty dictatorship in the world and have long outlived their usefulness.  They clearly do not understand that Obama works at the pleasure of the states (and apparently Governor Scott doesn't understand that…
Continue

A complete list of all the articles and instances of suspected voter fraud.................it is overwhelming and not one thing was done about any of it as far as I can tell.