Before the last primary, I went on the internet and looked for a "conservative voter's guide" to the candidates,  I could not find such a guide.  I did find a Christian guide to the candidates but not a conservative guide.  Many of us work a lot of hours and do not have time to research the candidates that are "non-partisan" (as if there really was such a thing).  I had hoped that the tea party or some other conservative group would give us a guideline regarding which candidate for every…

Anaversery of the Constitution Education

I will be giving a presentation on the Original meaning of the Constitution on September 14 from 4:00 PM until 4:40 PM with a question and answer period. It will be at the South East Library 10599 Deerwood Park Boulevard. We will address question on: What is under good behavior? What are high crimes and misdemeanors? What is Fiduciary duty? What branches have the initiative and when?  Please let others know.

We will be sharing our Newsletter "THE RATTLER" at the first of every month. … 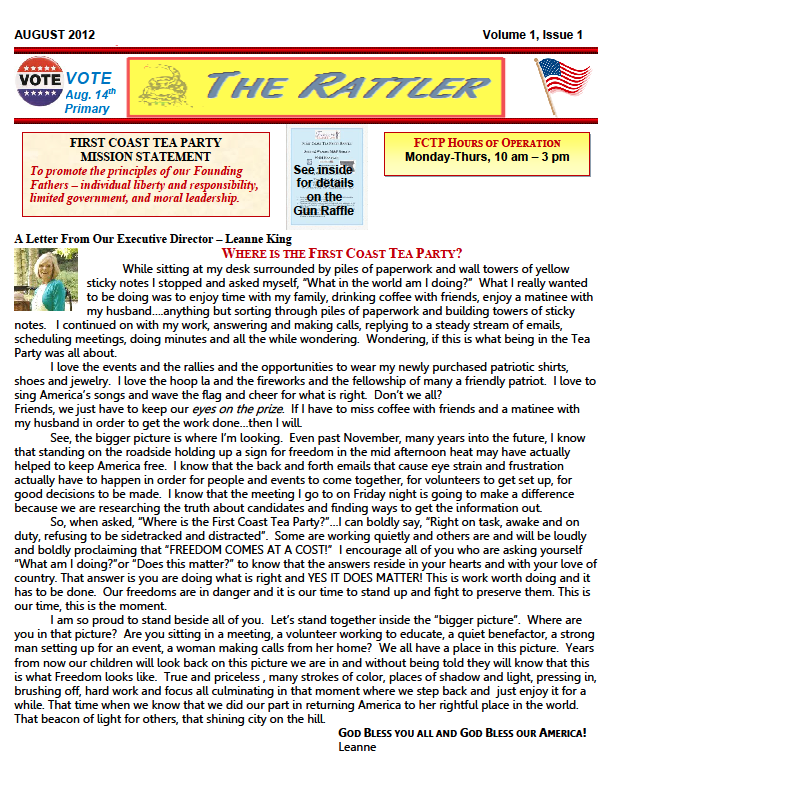 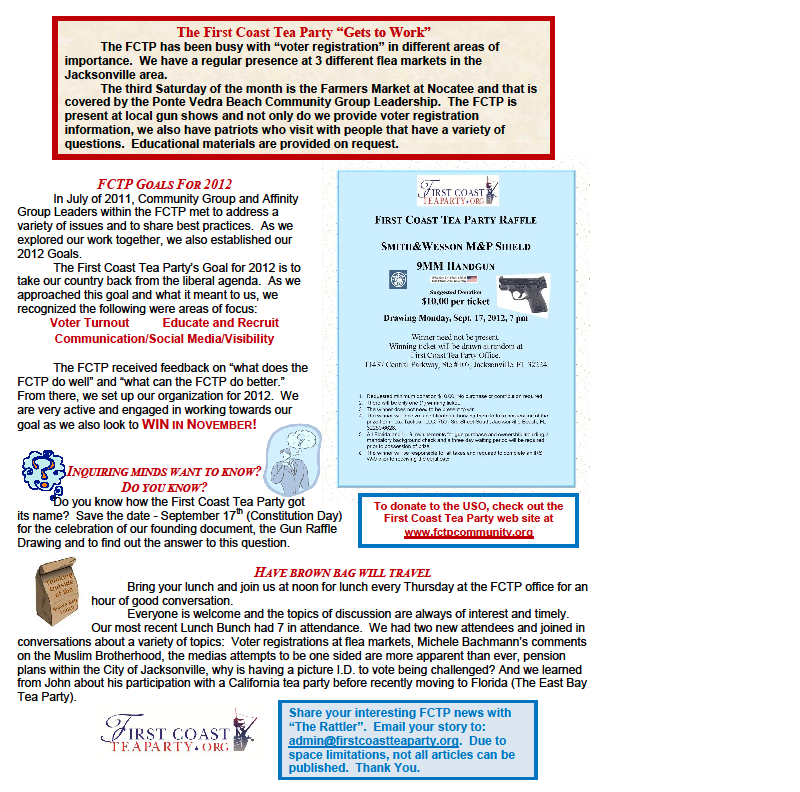 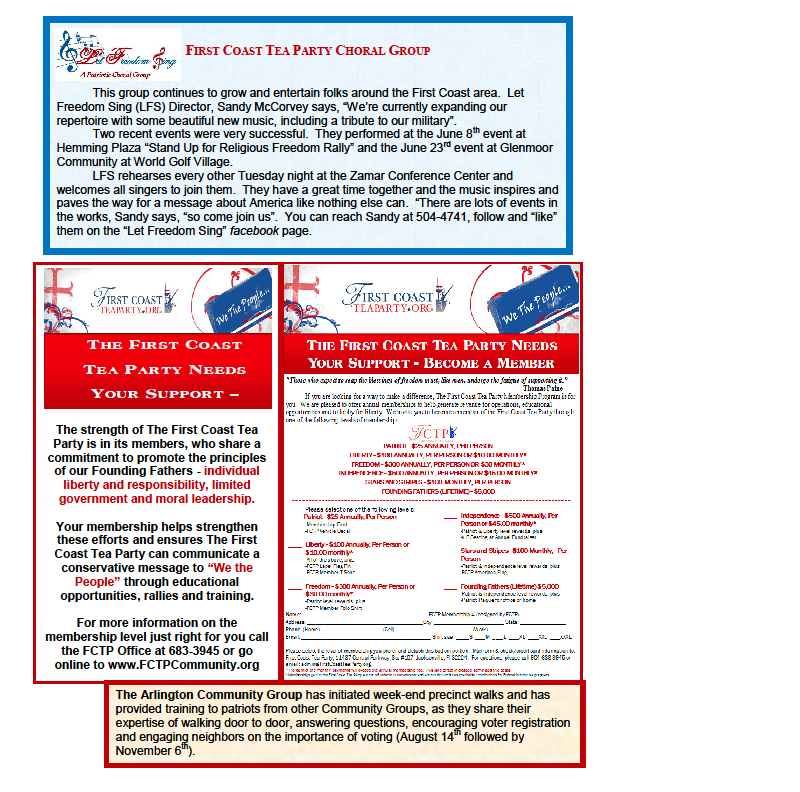 It was a GREAT time, educational and moving

Thanks to all who braved the weather and showed your support. 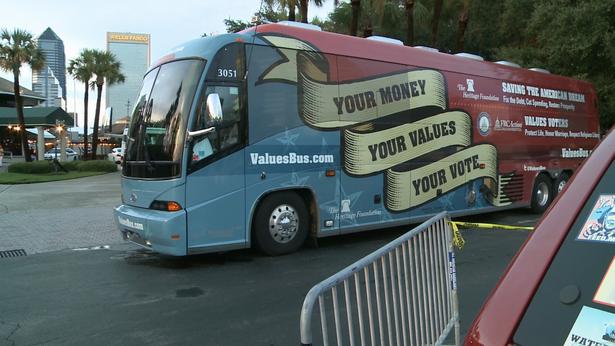 JACKSONVILLE, Fla. -- Leading up to the November election, the local Tea Party movement is…

My first event for TeaParty that was not at the Landing

Most Biblically Hostile U.S. President of our country EVER

Claiming to be a Christian and acting like a Christian are not the same thing. David Barton of Wallbuilders.com has come out with a list explaining why Barack Obama is possibly the…

American Thinker: Will Obama Keep Power 'by Any Means Necessary'?

Very scary, but you better read, because I for one have wondered in some nstances.  I know Obama would love to get all those young Mexicans he is giving amnesty to into the polls on November 6.  Although we here in Florida have been making huge strides to clean up voter registers and do require ID, many states like California do not require ID and even encourage people to…

A note about hollow point bullets.

Government orders for hollow point bullets have been highlighted on the internet recently (MSM won't mention it). I blogged about it when I first heard about the order of 4.5 million rounds for Homeland Security.

I remember a conversation I had with a fellow many years back where he mentioned that a standard bullet could easily exit the target if all it hits is soft tissue. The exiting bullet can damage anything behind the original target causing collateral…

As Mr. Sowell always does, he has hit the nail on the head!

RULE OF LAW OR RULE OR MEN?

FCTP gets new neighbors only 0.2 miles away: ForidaBarrackObama.com/Southeast-Jacksonville-Office

Just providing a copy of the details:

This organization is on the ground in Southeast Jacksonville -- and a lot of folks have been coming out to volunteer. So it's high time we made it official: This Wednesday, August 22nd, we're opening up the newest Florida office just down the road.
It's a great chance to meet new friends and catch up with old neighbors -- and I promise that once the party's over, there will…

2016 Outstanding article. THIS EXPLAINS IT WELL
I have no idea who wrote this as I pulled it off facebook. Whoever, they deserve all the credit.

From the producer of Schindler's List, and based on the book by Dinesh D'Souza (bio below -- this isn't the work of a publicity hound, but a credible analysis by a serious scholar, comes the doucmentray…

CITY COUNCIL MEMBERS UNDER ATTACK FOR 2012-296 VOTE, THEY NEED OUR HELP NOW.

My next communication was going to be one where I would ask that we all send thank you notes or make calls thanking the city council members for their "no" vote on 296. We should do that and I encourage you all to take the time to let them know that we appreciate their listening to the voice of the people.

Right now, Councilmen Gaffney and Brown need to feel our support for they are under attack. Please take action and…

At the Election Center 5200-2 Norwood Ave. in the Gateway Mall

You must be registered to take classes.

Look forward to seeing you there.

The Charge of the Grey-Haired Brigade

Remember us?  The “baby boomers,” “Senior Citizens,” “Dinosaurs,” “Old Geezers,” and “Over the Hill gang.” Guess What?  We’re baaaaack.  Remember 2010?  We delivered the House and almost the Senate.  Well, what we started in 2010 we intend to finish in 2012.  Democrats make the mistake of believing all we care about is our Social Security checks, so we know what to expect.  Guess what liberals?  Our real concern is for the future of our children and grandchildren.  We intend to see that they…

Your Money, Your Values, Your Vote 2012 Tour in Jacksonville

Next Tuesday, Aug. 21st The Heritage Foundation and the Family Research Council will join the First Coast Tea Party at River City Brewing Company, 835 Museum Circle.  Their bus, the Values Bus will be there.

Come at 5 pm for food, music networking.  Then from 6-8:30 you will have the pleasure of hearing Genevieve Wood of The Heritage Foundation and Jeanne Monahan of Family Research Council  along with Insights from Local Leaders on a variety of topics dealing with our American…

Before I call it a day, and a day it has been - I wanted to make sure that I share with you the results of this fight for freedom.........The article below was just received from the Florida Family Policy Council.  I shall thank them for this information, for all that they have done to help make my job easier and to help the citizens of Jacksonville during this long process.

I will make no comment except that I am glad the months of this bill are over, and now, I hope the council can move on to the city's finances and next years budget.  I recommend you keep track of who voted and how for the next elections however (I am going to).  Perhaps a thank you is in order especially to Mr. Gulliford common sense suggestion of using a public relations campaign rather than trying to use law. …