We need  to urge our FL Senators to support SB-296. It is stuck in committee because the Florida Sheriffs Association and FL National Guard want to limit your rights. They need to pressure the Governor, the Florida Sheriffs Association, FL National Guard and Don Gaetz as well. This is in addition to the contacts provided below.

Marion Hammer is not happy with the Governor on this.…

"First and foremost, a special THANKS to all of those who have been working tirelessly to Stop Common Core in Florida. Now, they need our help. It will only take a few moments out of your time but it will go a long way.

HB25 is the bill drafted by Representative Debra Mayfield to…

Below are meetings and events for the next two weeks ending April 12, 2014.

Please use the links if provided to get time and location information. 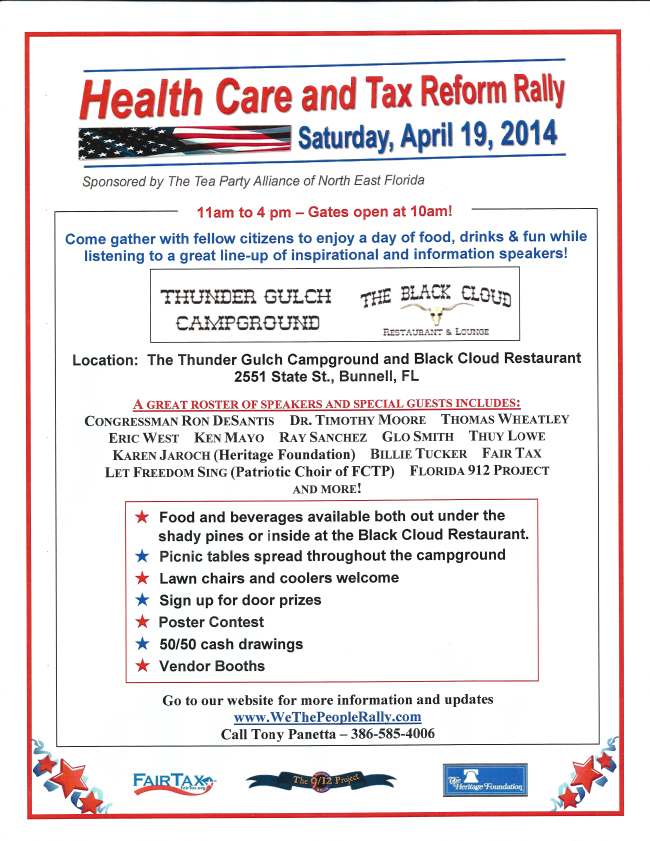 Please call your US Senators and ask them to sign on to Senator Grassley's letter to discontinue funds for Common Core.

Please read the the four documents below and then call your US Senator's office. Ask them to sign on to the letter and ask how you can send a copy directly to their email.

Let them know you will be calling Sen. Grassley in a week to…

How a Citizen Becomes a Candidate

How a Citizen Becomes a Candidate

This is a very necessary part of our election process to give us choices as to who we will put on the ballot, and requires the least amount of effort by the voting public, so make sure you sign their petitions!!  It’s NOT a vote for that candidate. But it will get them in the PRIMARY on August…

Below are meetings and events for week ending March 29, 2014.

Please use the links provided to get time and location information.

POTENTIAL USE OF CITY "CODE ENFORCEMENT" AS "HIRED GUN", AGAIN???

A letter sent me by my old friend Ozman Sparkle, concerning corruptive use of code enforcement by COJ, again...

I have been digging into the Bostwick Building squeezing of a property owner and taxpayer placing him in the touted jaws of Death...the Dept of code enforcement intent to auction.

? HOW WOULD THEY ORDER THE AUCTION OF A FULLY TAXPAID PROPERTY?

COJ fills the media with allegations of scofflaw non tax payments and hundreds of $$ in daily $100.00/day…

Apparently HE DID NOT HEAR US

We are back on In-State Tuition for Illegal Aliens

On March 11th I sent out an Action Item related to HB851 ( Oppose In-State Tuition for Illegal Aliens) and requested contact with various Elected Officials. If you wish…

ACTION ITEM: HOW MUCH WILL COMMON CORE COST YOU?

A bill to allow medicinal, non-psychoactive, marijuana has passed out of the appropriate senate committee and will now be ready for the whole senate to vote on. As mentioned below, a companion bill has begun in the house. Depending on your thoughts…

SB 144, the Senate red light camera repeal bill, will be heard by the Senate Transportation Committee on Thursday March 20, 2014 at 9:00 AM in Senate Office Building Room 37 (the basement). I will be there to speak in favor…

Florida Property Rights:
When the state legislature dismantled state oversight for growth management and abolished the DCA, they said they wanted to leave local land use decisions to local governments. Some legislators seem to have forgotten they said that, and are apparently determined to make sure that local governments aren’t allowed to make local decisions.…

SENATORS ON SENATE JUDICIARY COMMITTEE MUST
HEAR THE STRONG SUPPORT FOR
AMERICAN LAWS FOR AMERICAN COURTS!

Last week (3/11) I sent a communication titled:  IT IS TIME TO MAKE CONTACT – SMASH Florida College Tuition Subsidies for Illegal Aliens UPDATE THE FOLLOWING IS WHAT HAPPENED IN TALLAHASSEE on Thursd…

OBAMA, IN HIS SOLE DISCRETION

In all his unfettered arrogance, he ignores the law and then, wonders why he has become so unpopular.  He is the poster child for why our country has a co-equal divided government!

I read that signing anything in an email is not legal.  I agree with this post, but think that we should have people given petitions and get signatures from live people.