Keep the phone lines buzzing.. ACTION
The fight isn’t over and the House hasn’t caved - yet. Let’s put some pressure on the Senate to support the new House CR bill calling for delay. We need to show some energy and have our members melt the phone lines, clog the emails, flood the Facebook and tweet the dickens out of twitter. It is time to force the Senate to Unite behind Ted Cruz and delay obamacare. The list of 25 Senators who voted FOR Cloture, meaning they joined Harry Reid in…

Melt Down the Phone Lines

Rushing to get this out so it may not be perfect but it is a great start. Look for more information to be added to the comment field as it is received.

Lots more to come on this. But here is a start. CALL CALL CALL
Last week, the American people gained a huge victory as the House sent a bill that defunds Obamacare to the Senate. However, our fight is not over; We the People must keep up pressure on Congress to make sure defunding actually takes place before October 1.

This is our last chance, everyone. We have to stop Obamacare here and now, or watch as in 10 days the President’s disastrous health care law further restricts the…

ACTION ITEMS FOR COMMON CORE - THE TIME IS HERE

This is a critical week for work to stop Common Core in Florida and so many people have been hard at work for our children. Please make every attempt possible to make contacts as defined below. Our elected officials in Tallahassee need to hear from us.…

NEIL KEENAN IS ASKING FOR OUR HELP.

Do you know the names of the Three books (financial) of the cabal?  You should, it's your money they keep taking illegally. Can you help?…

Voter apathy is a greater danger to our nation's future than even the lack of leadership that has been so prominently on display over the last number of years by the elected leaders of both parties.  The power of the people is greater than the people in power IF WE THE PEOPLE vote and hold those elected accountable.

In 2008, 6 million Americans did not vote because they did not know how to register or missed registration deadlines, according to the US Census.  This year,…

As a member of the Blackrobe Regiment of the 21st Century, former Pastor for 20 years, current Business Chaplain, Tea Party Radio Broadcaster, homeschooler for 25 years, and Biblical Parenting Presenter, I welcome you to peruse my website: www.RightingTheRight.com to learn more about how we can...

Righting the Right is our passion to bring back our…

Time is running out and we need to engage in the last push to have our voices heard on the issue of ObamaCare........Defund it now!!!!  I would not stop with one contact I would call and email everyday until there is a vote. No need for me to go into all the details, as FCTP members you understand the issues.

Are you interested in attending a Common Core protest? If so please respond in the comment field below

Florida Parents against Common Core has requested the following from the FCTP. If you are interested please let me know. If the showing would be small it is best not to move ahead in this manner.

"We have won the first battle in the war against Common Core, we have a bill to pause Common Core sponsored by Debbie Mayfield in the House of Representatives (HR25).  We now desperately need… 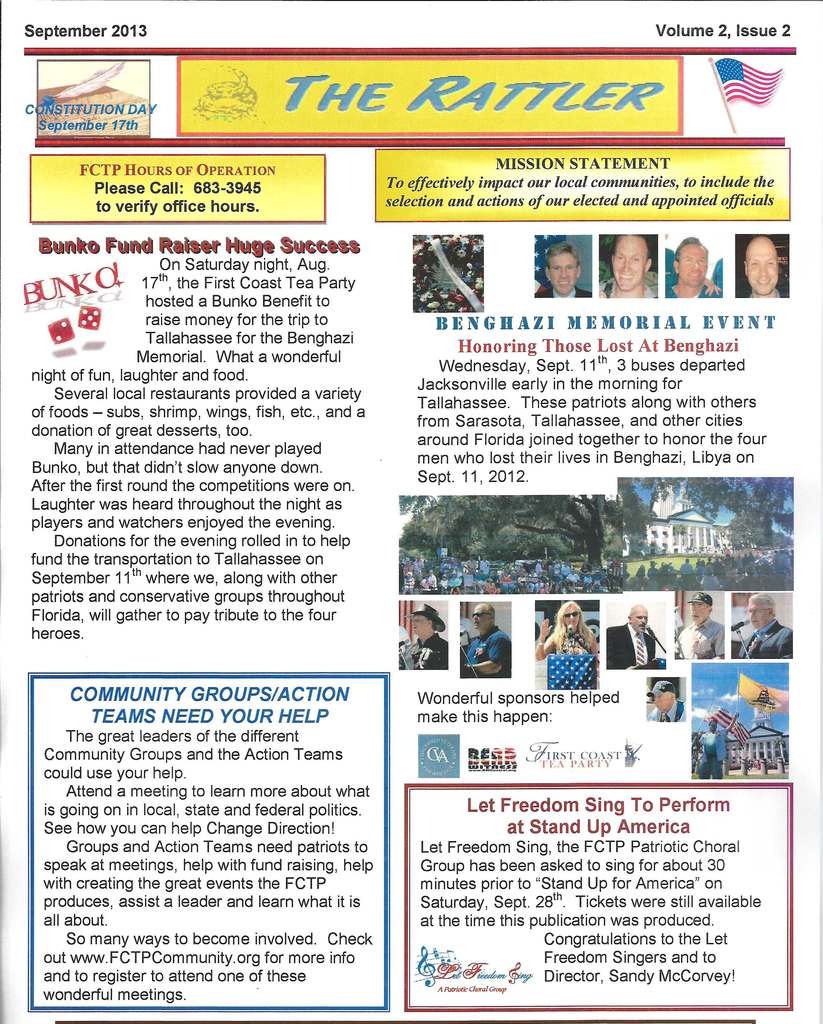 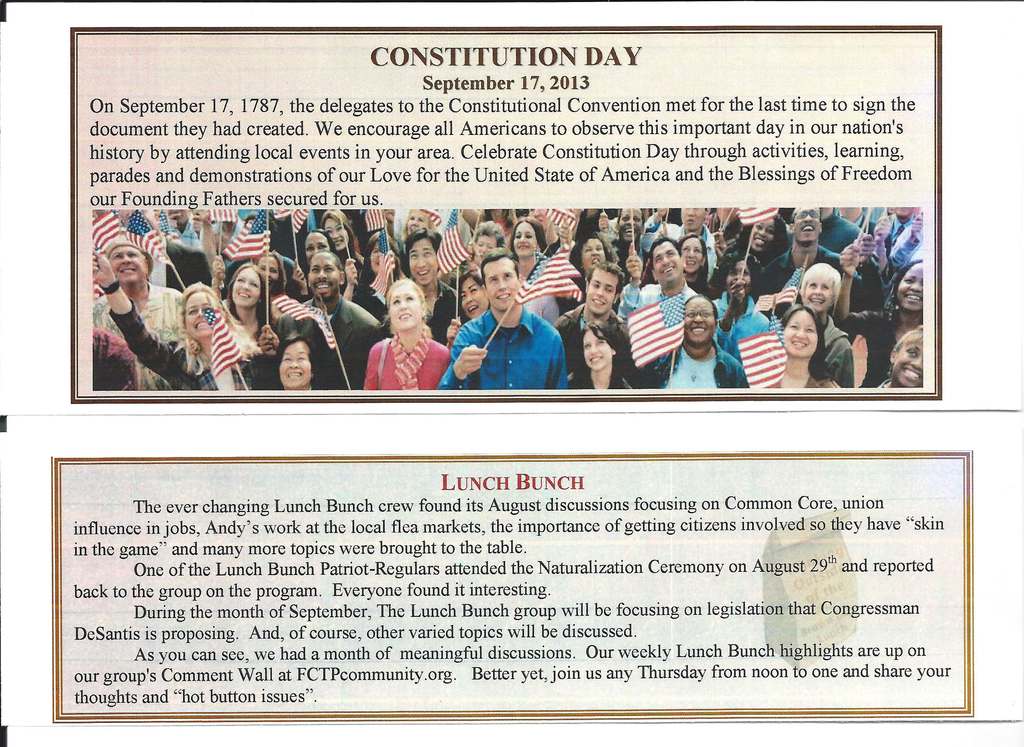 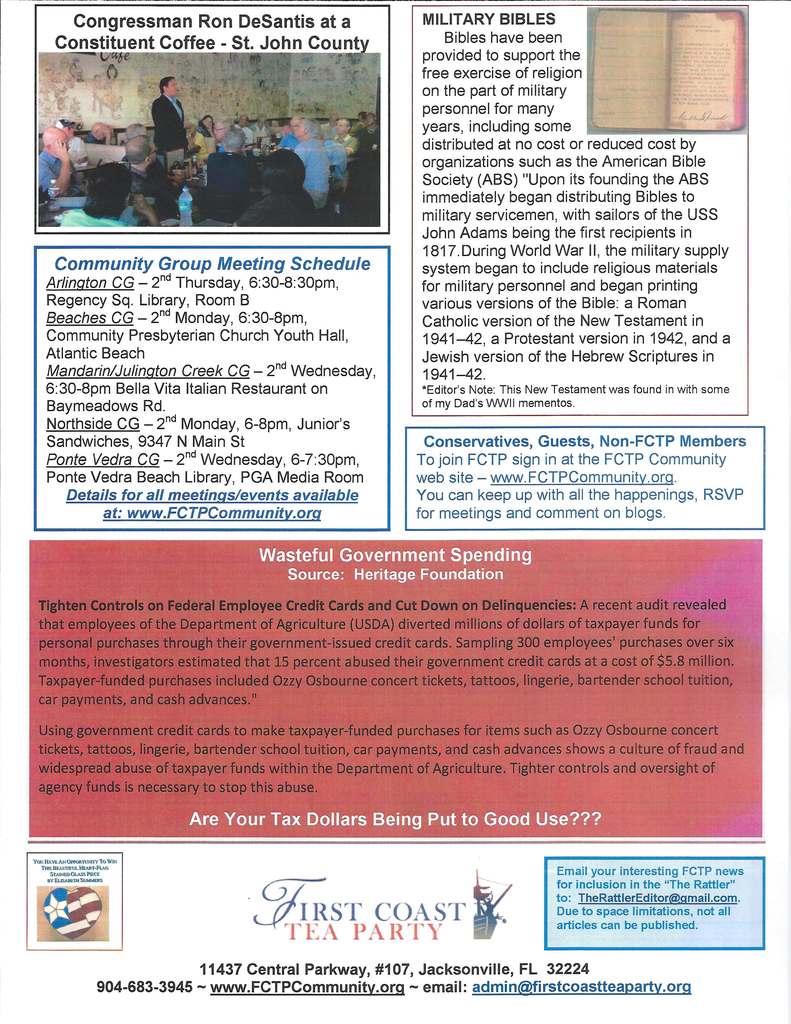 If the commission in Sarasota works to repeal Stand Your Ground, others will follow.  This isn't just their fight, it is our fight too. They have asked for as many signatures as they can get.

United States Civil Defense Assoc.(USCDA) is on RED ALERT due to the flooding in Colorado.…

Mychal Massie: Forget everything else Obama has lied about

Certainly Mychal presents this to encourage us to think about all the lies up until now..............and he is right on so many levels!

Salute the Danish Flag - it's a Symbol of Western Freedom

Interesting and helpful to know all of them (although most of us have heard many of them).  Knowing might allow for a counter argument.

Ok Northeast Florida Parents Against Common Core, we need to step it up a bit. The Education committees are going to start meeting the week of September 23. We need to start making phone calls to all of them and let them know we want Debbie Mayfield's bill (HR25) to be heard. We want to hold them accountable and let them know we support Debbie Mayfield. If we keep speaking up and different…
Continue

Message to Speaker Boehner on Defunding Obamacare - E-mailed to him 12 Sept. 2013

Please - no more "symbolic" votes to defund Obamacare, and no more "trick" bills, which give the Senate a way to fund it , even with we Americans so overwhelmingly AGAINST it. Before you became Speaker, you seemed so conservative, and so pro-Tea Party at that time that we had high hopes when you became Speaker. Unfortunately, you started to lose us when you forgot the pledge that any bill offered must be accompanied by a quote from the…

Just got back from our trip to Tallahassee for the Bengazi Tribute.

It was a long trip on the bus but what a great day.

The speakers were excellant, the wheather was great, I just wish more people had attended.

We estimate around 155 people, the media will probally say 25, if you wanted to come but did'nt

you missed a good day to  be "Patriot"

Thanks to all that made this event possible.

Chicago Values..............extensive data on Violent Crime and Murder in the Windy City

This is an unbelievable web site as it is exclusively Chicago and crime, murder and meyhem stats which have been researched and verified.  Very interesting and be glad it isn't our fair city.  Sample below and link to the web site.

ACTION ITEM - US INVOLVEMENT IN SYRIA

Hello Patriots!  It is time to once again have our voices heard with those we've elected to represent us in the nations capital.  We are all aware of the very serious nature related to any strike on Syria. The ripple effect could prove to be beyond anything we could imagine and while we face many issues that must be addressed this one is of the utmost importance. No one should sit on the sidelines waiting to see who wins the game. There…